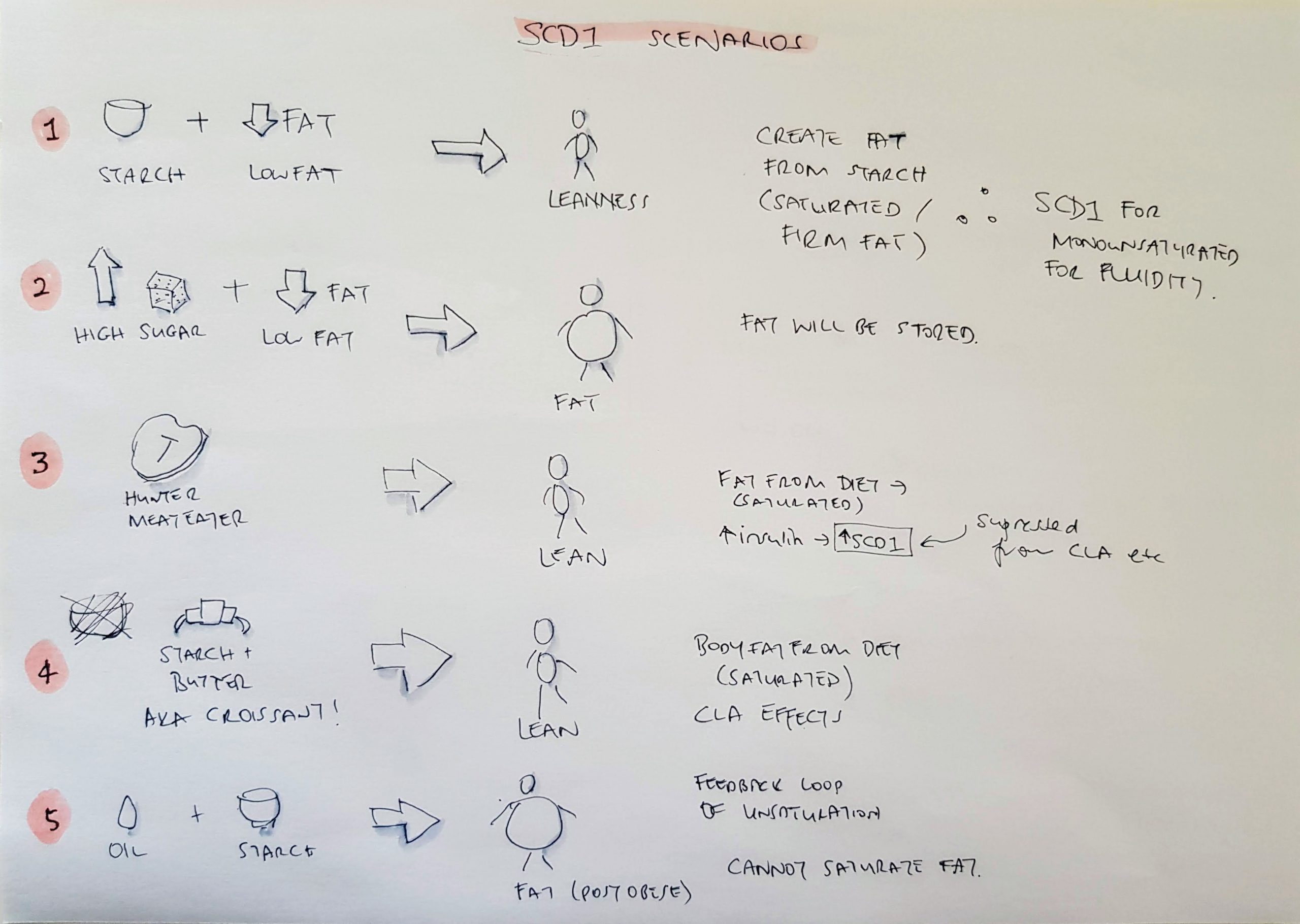 Hands up anyone that understands the biochemistry even at the level Brad Marshall explains it? 🦗 Yeah I thought so. (Even if there is no one yet reading my blog I still think it would still be 🦗s with lots of people reading EasyTCD!)

I’ve been trying to use sketchnoting to better understand anything I’m seriously trying to learn. I do blame Brad for this as he’s the one that has made me feel very uneducated even after a couple of years trying to understand “ketoscience”. That’s simple in comparison with all the Peter Hyperlipid/Paul Saladino/Brad Marshall gooblydygook. Anyway I wanted to share my sketchnotes for those who may find it easier. It has helped me process what I have read and I started sketchnoting after I read the ROS Theory of Obesity or the “Start Here” series found on Fire In a Bottle.

So if you want to follow along here is the series about SCD1 Theory of Obesity – https://fireinabottle.net/category/the-scd1-theory-of-obesity/ (come back when you have finished or get stuck!)

I did my sketchnotes for Parts 1 and 2 of the theory on the one evening and then Part 3 was done after… as I had already done my sketchnotes on 1 and 2 before Brad published Part 3.

I’m posting scans of my Sketchnotes (I don’t know how to do digital notes yet esp if I’m reading off my laptop and trying to take notes at the same time… ). I’ll narrate my notes in the captions as it may help you read my handwriting (there’s a reason someone likened it to chicken scratch and why I tend to prefer typing).

Why People Get Fat

Fats that are the end product of SCD1 so inhibit it:

Panel 2:
You can feed your mitochondria from either dietary or your stored body fat.
Leptin is released from your fat cells. There is a inverse relationship between your insulin and leptin. Leptin helps decrease/use fat while insulin stores fat.
SCD1 is the control mechanism of the saturation of fat and will help put fat into long term storage or burn it.
Long Chain Saturated Fats become Long Chain Monosaturated Fats (MUFAs) in the body. e.g. stearic acid becomes oleic acid and palmitic acid becomes palmitoleic acid.
Your body NEEDS some MUFA but creates its own via SCD1.

Panel 3:
A fat person can create a lot of SCD1. The fatter a person is the more leptin they should be producing.

If someone’s fat is mostly saturated then there is a lot of leptin which helps burn fat and increases ROS and reduces SCD1. In this cycle, you burn fat which starts goes into (?) ROS and that effectively reduces SCD1 which increases saturated fat which goes back to ROS etc. This in my mind is the “good” cycle.

Panel 5:
The question is — what about MUFAs? It depends on if it’s dietary or from body fat…
Starch via de novo lipogenesis creates saturated fat which increases SCD1 (which is bad right? at least that’s what is going on in my head…) but that’s for balance (as otherwise your body would just be a block of tallow and make you unable to move?)
Increased MUFAs (eaten) will need to be saturated for your body to be in balance… but the body doesn’t have an enzyme to saturate the fat… but it does have OEA as a signal. And OEA sounds magical! It helps saturate fat in the liver and also moves fat around in the body. It decreases appetite, helps metabolise (that’s “move” in layman terms!) and decreases SCD1.

Last panel (6):
Imagine a caveman (person?) eating potatoes and bone marrow (which is MUFA and not Saturated Fat!!). This increases glucose and insulin from the starch. The MUFAs go into the fat cell and excess spills over and gets taken up by the liver and through de novo lipogenesis creates triglycerides which also cycles back through the liver and does this cycle.

Despite this cycle… Brad recommends that if you are fat… don’t eat dietary MUFAs… at least not olive oil but bone marrow gets a pass as it’s high in SCD1 supressing agents such as CLA and palmitoleic acid.

I’m trying Berberine as a supplement and have CLA on order. I also have some Jiaogulan tea at home from my “adaptogen” stage of my life so will try having that every so often. 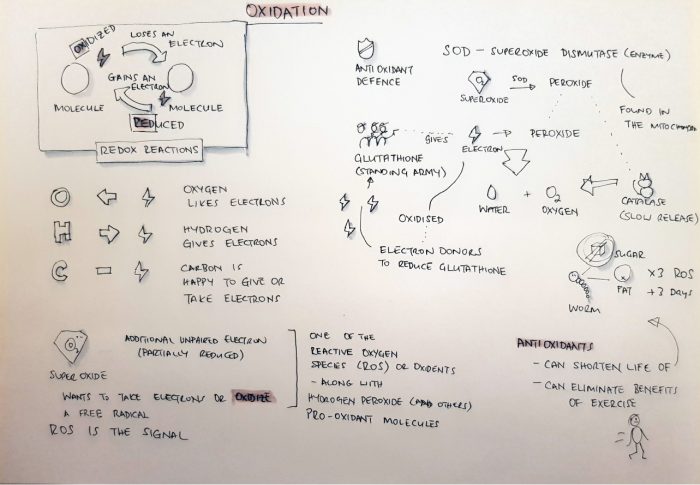 So most people start at the beginning. I didn’t and started with the SCD1 Theory of Obesity… but I’m starting again from […]


Thanks for posting this Yvonne, I was also thinking of sketching out the pathways and elements to better understand Brad’s insights, I believe he has uncovered a critically important metabolic switch in SCD1 that answers a lot of questions.
I want to look at your notes on a bigger screen later and will comment further. I’m also eager to “N=1” TCD and see the results!
Cheers
Peter


Looking forward to seeing your n=1 journey too!


If you can share your diagram that would be great! I skipped sections I don’t understand!


This is awesome! I also wanted to go back through the posts and draw diagrams and take notes. Now I don’t have to. Yours made total sense to me. Great job.


awww thanks Kelly! I still want to double back and do the other series that Brad has as it leaves me bamboozled if I just read it. It sounds good… I just don’t ‘get’ it!


Thanks Kelly! I appreciate any encouragement…


This is so helpful. Thanks for making things easier. Any clues as to why after adding SA enhanced ghee I seem to be fuller in the stomach not vice versa? I’ve added Berberin too.


Hi Liza – what’s the vice versa? Shouldn’t adding SA enhanced ghee make you feel more satiated? I’ve added Berberine but stopped for a bit as I’m a bit concerned as my blood sugar (or at least my Continuous Glucose Monitor) is a bit scarily low at the moment.


I am left a bit confused. If this works this way, why did and do so many people lose weight on MCT oil? I eat a lot of macadamia nuts as they help me with satiety. Is this theory suggesting they are bad for me or will lead to me making too much SCD1?


Unfortunately I’m not the scientist… but MCT Oils and macadamia nuts are NOT PUFAs… so that helps. I think the theory is if you are lean then MCT Oil and Macadamia nuts won’t matter but if you are obese or have fat to lose you could end up in what is in my mind the “bad cycle”.


thanks so much for this.
i have tried berberine and green tea extract but they had no effect on my satiety.
im still hungry after eating, no matter howmuch i eat. it seems like my body is trying to gain weight (although im already overweight) to compensate for the extended fasts i made (which i never should ve done..)

im going to try more of the scd1 inhibitors, hopefully one of them will make a difference


Hi Jon… so with my satiation I haven’t been trying for it anymore but maybe I’ve reached some magical threshold? But how I did reach it was totally saturating with stearic acid. Try with cacao butter or stearic acid powder (with other foods). I got it from steak (with Stearic Acid) and with eggs and “SA” fried toast.
I’m not sure of the green tea extract — I didn’t think that was a SCD1 inhibitor (btw I don’t think the SCD1 inhibitors help with satiation? But I could be wrong – I’ll have another read up of my notes and the FIAB site).
I think the Berberine has helped with fat loss… as I feel more “svelte” but it hasn’t shown on the scales 🙁


Can you eat salmon on the croissant diet?


This was a weird one… Based on what I have determined it’s not the best food… as it’s high in PUFAs (Omega 3s are also PUFA). But Seafood is ok. I would suggest it’s OK but not optimal. I’ll eat Salmon Sashimi or Salmon every so often but my ‘base’ is eating beef or lamb for protein.